By Elijah Wolfson / September 8, 2014
from Newsweek.com

see more about the project here 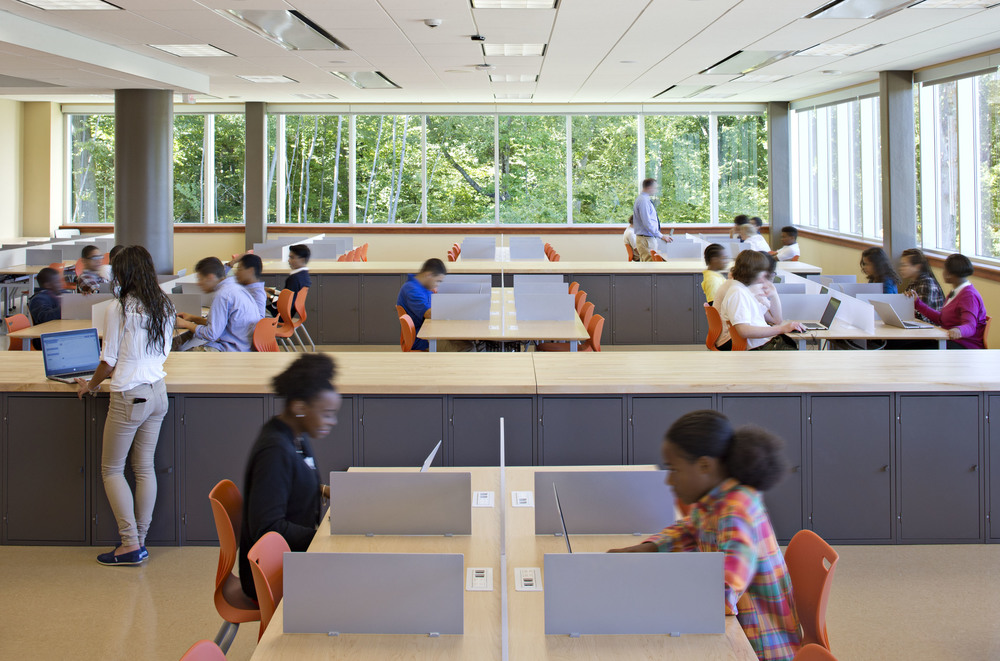 Learning Studios outside the classroom replicate the real-world settings students may encounter in work or college and provide each with a desk and project storage space.

Pulling into Bridgeport, the train slips past decaying, emptied brick factory buildings, every window a jagged smile of broken glass, then on by row houses hemming in yellowing lawns strewn with beaten sofas and sagging clotheslines, housing projects that appear nearly identical to those used as locations on The Wire .

Still the most populous city in Connecticut, Bridgeport was once a thriving industrial center. But it suffered during the nationwide deindustrialization of the 1970s and 1980s, and by 1991, the city was forced to file bankruptcy. Today, there’s barely a storefront in the old downtown that isn’t empty with signs in the window announcing it’s available, presumably at bargain-basement rates, for lease.

The cabdriver who’s taking me from the station to the school I am visiting is Haitian, and speaks a French-inflected English he’s picked up after spending 15 years in the States, all in Bridgeport. He has a pair of 6-year-old twins, boys, who will start first grade next year in Bridgeport’s public school system. I ask him if he knows about Fairchild Wheeler, and he says of course.

He knows because Fairchild Wheeler Interdistrict Magnet Campus is a $126 million behemoth, a huge civic project that has drawn on the brightest minds and latest thinking in education design in an effort to turn around the troubled Bridgeport public school district (the Global Report Card ranks its students in the 29th percentile in math and 30th percentile in reading). It’s a brand-new (so new that the Google Map Earth view still shows a construction site) public high school that will recruit students from across the district, from the (relatively) wealthy suburbs to the poor urban areas. It’s also a recent standout example of what could be the first major shift in classroom design since the one-room schoolhouse.

continue reading the article at Newsweek.com

JCJ Architecture recognized by The University o...
A Wrinkle in Time: Transformation and Renewal i...