It is a given that Boston experiences some of the most brutal winters anywhere – numbingly cold temperatures, unforgiving wind, painfully short periods of daylight and lots of snow; often lots and lots of snow. Ironically, people always talk about Chicago as the benchmark for bad weather. The Windy City? Seriously ... Chicago isn’t even in the same league when it comes to average monthly wind, cold or snowfall, for any month. And their snowiest winter on record, 89.7” during the winter of 1978-1979, would barely crack the top four snowiest winters in Boston.

Ah, but as harsh as Boston can be during a normal winter, it’s time to recalibrate your notion of “brutal” and crown a new king of snowy periods in the lower forty-eight. Boston is in the midst of its snowiest month in recorded history – 58.5” during just the first fifteen days of February. Not impressed? How about 90.2” in the past three weeks – more than Chicago’s record total for an entire season. Not even the ’78 blizzard dumped such snowfall on Boston over such a short period of time. For the season we’ve witnessed a total of 104.3” . . . so far. And for the record, the winter of 2014-2015 is barely 2/3 over. 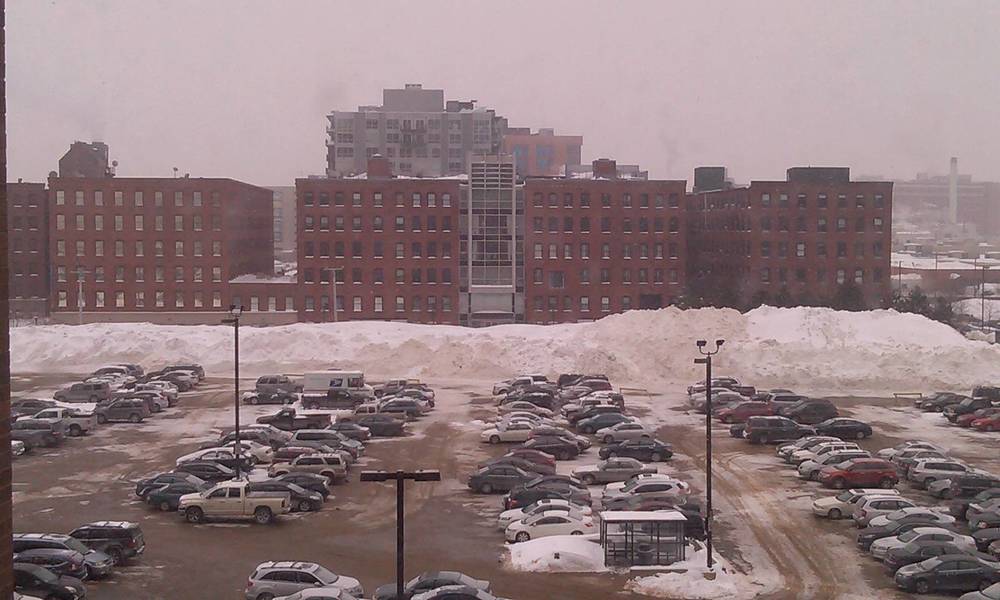 The White Mountains, as seen from JCJ's Boston Office 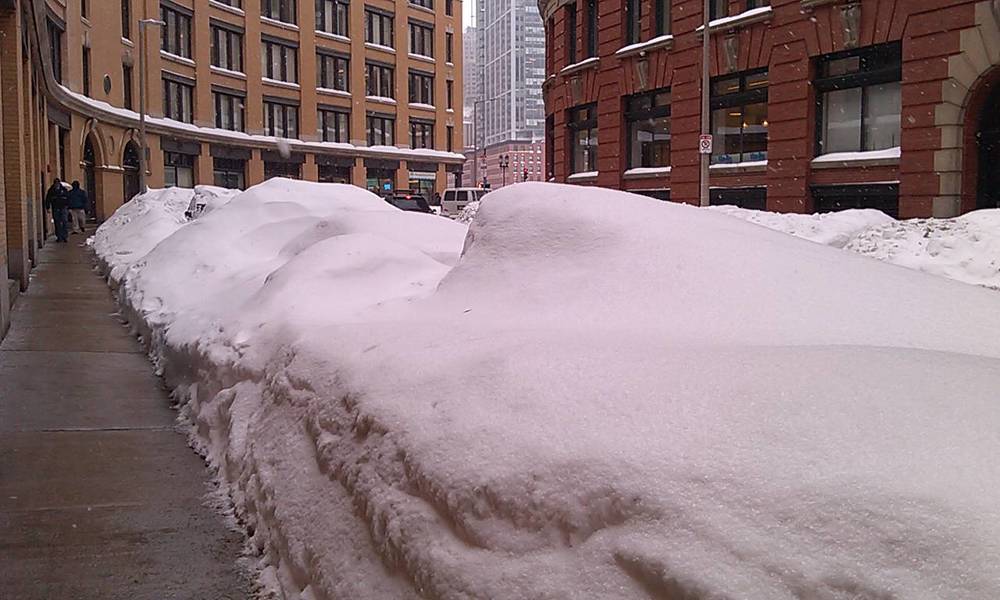 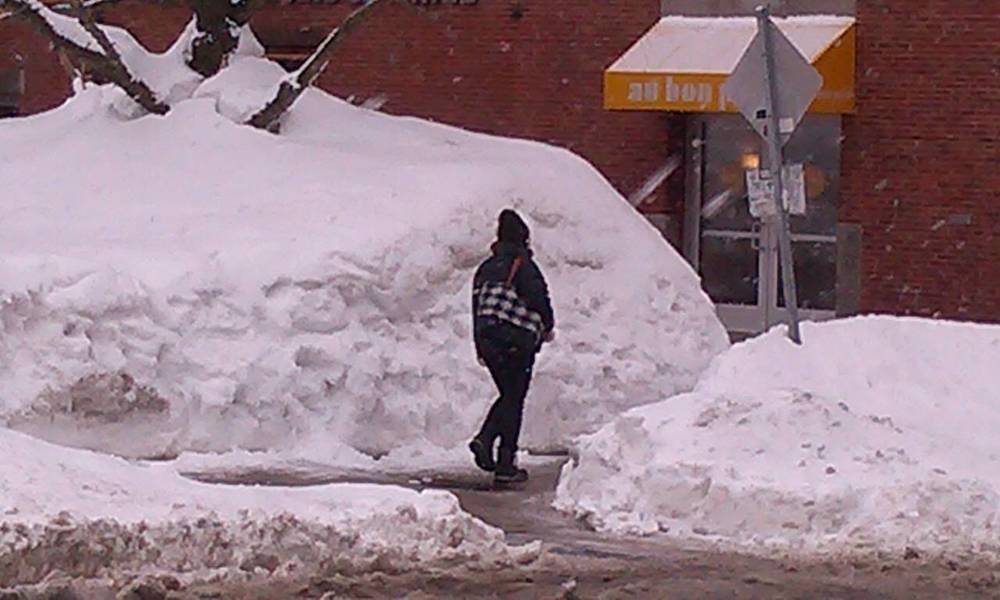 What does all of this snow in such a short period of time mean? For architects, urban planners and other designers it demonstrates the need for placing added emphasis on accommodating inclement conditions in future design. Vehicular and pedestrian access through narrow streets and sidewalks, already a challenge under optimal conditions, becomes particularly dangerous when inadequate space is available for snow removal. Public transportation devolves into an unreliable object of scorn. Handicap accessibility through narrow, ice and snow-encrusted pathways and around buried curb ramps render movement virtually impossible. Obscenely mountainous piles of shoveled or plowed snow at street corners and the ends of driveways become genuine hazards to life and limb. 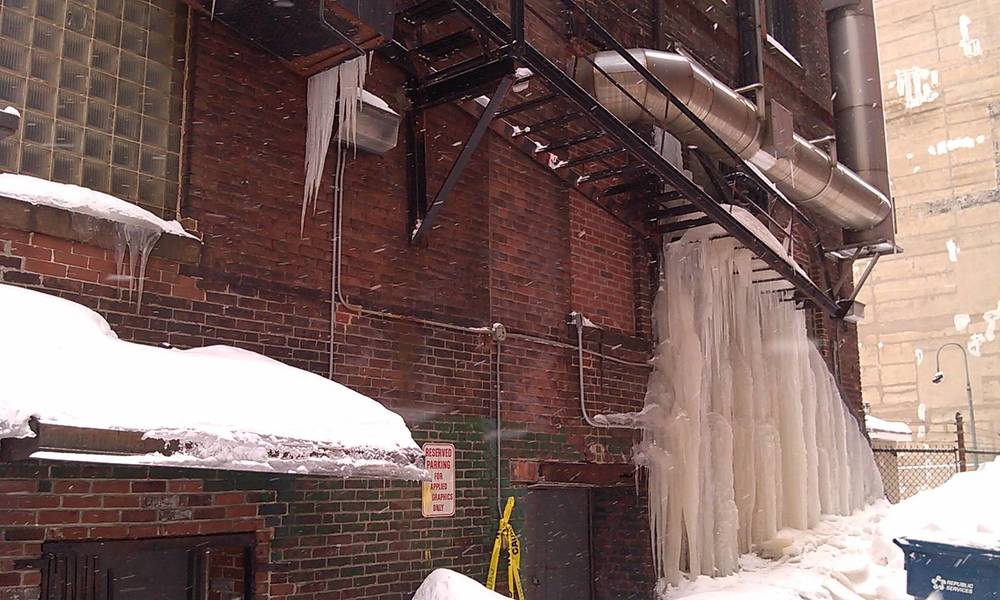 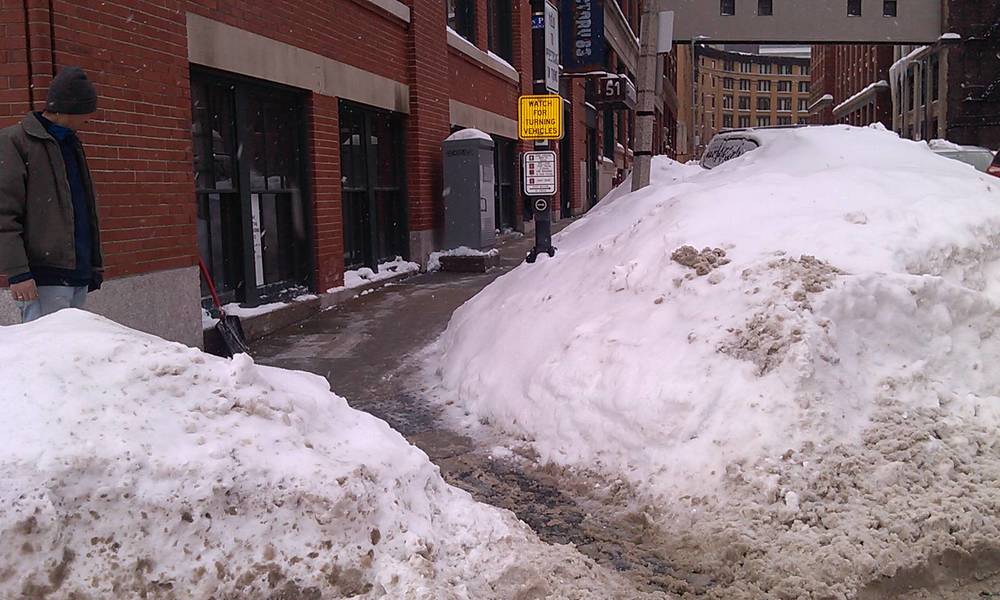 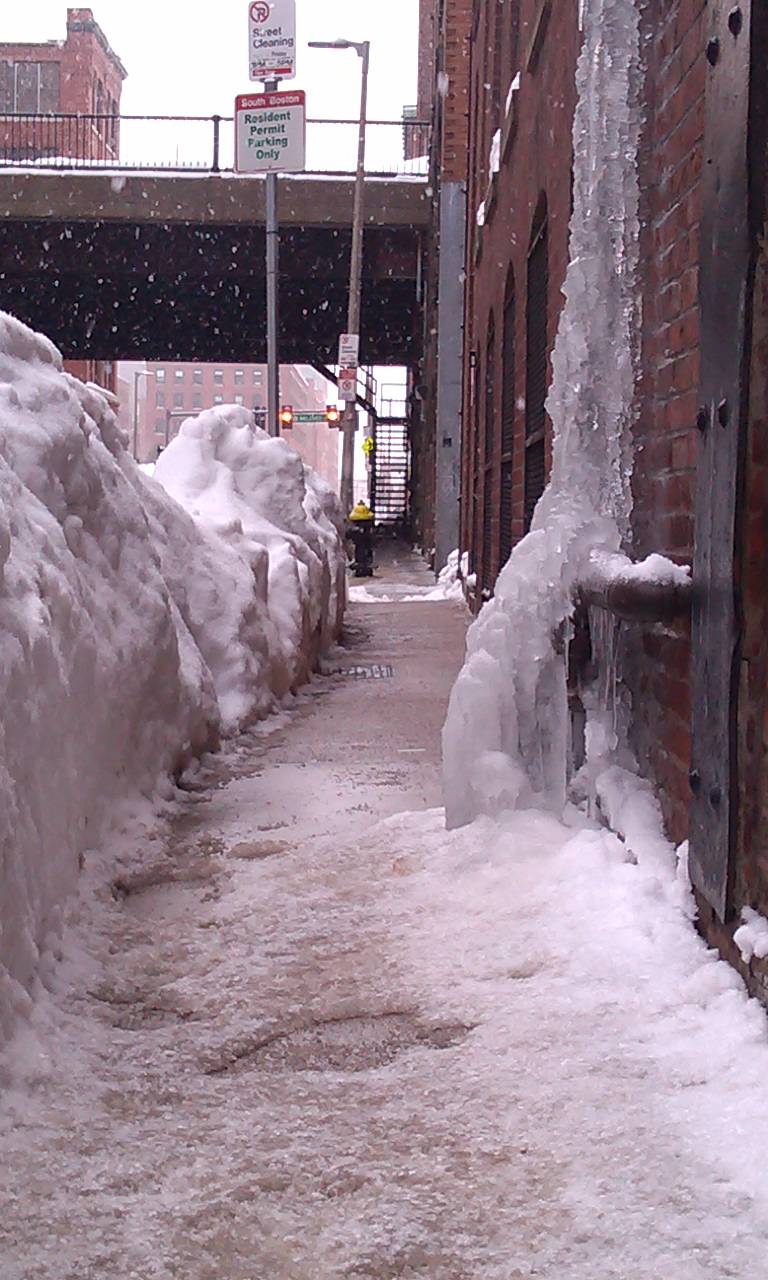 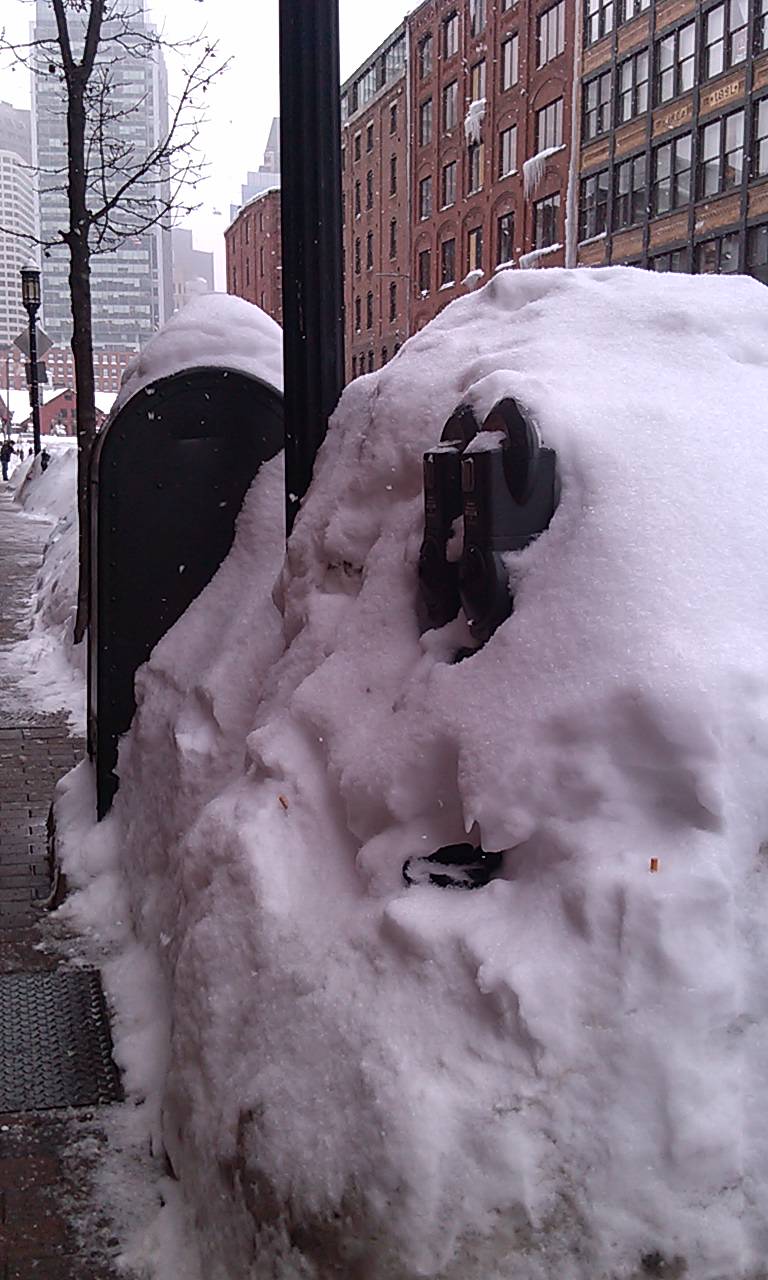 But such colossal snow totals wreak havoc in other ways as well. Icy stalactites, reaching lengths measured in building stories, are commonplace hazards where poorly-designed or maintained downspouts are positioned along inadequately-sized walkways. Fire escapes as means of egress become useless ice-encrusted objects of ridicule. Exhaust outlets, often buried in the onslaught of snow drifts, threaten the health and safety of building occupants when inaccessible or unattended to.

Boston has always prided itself on being able to withstand the harshest challenges thrown its way. But simply withstanding does not meet the spirit or ideal of a modern, world-class city. If simple pedestrian or vehicular movement is impacted for prolonged periods of time, or if health and safety concerns are exacerbated because of cramped, ill-conceived spaces or poorly-executed plans, we must rise to the modern challenge of a new winter normal, and design accordingly. This livable city must remain livable throughout the year and despite the weather conditions. Those in the design community can make this ideal just a bit more attainable with the winter of 2014-2015 as their reference. 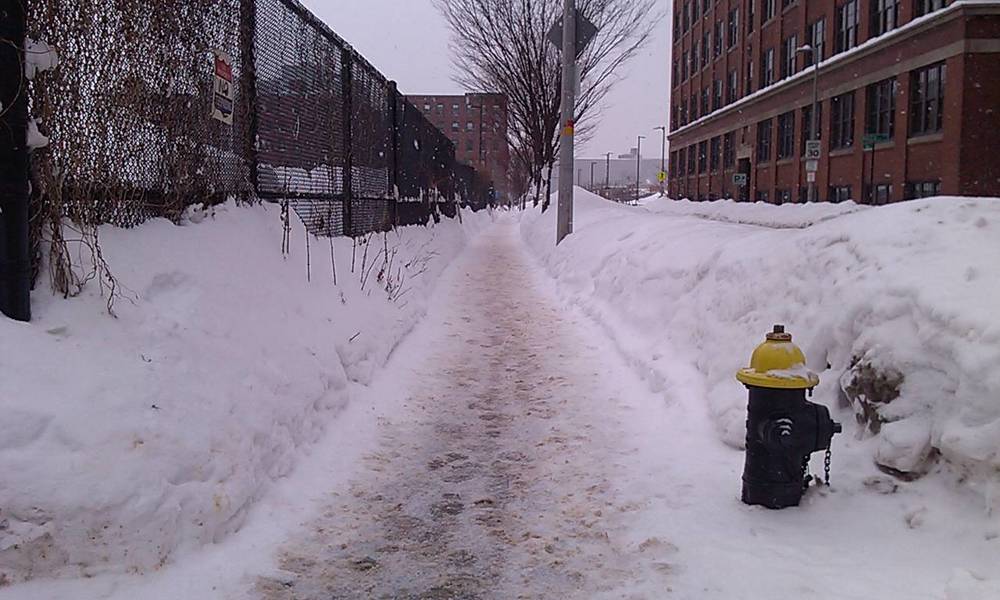 The Straight and Narrow

Redefining the Library of the Future
Marine Science Magnet High School of Southeaste...