Back in May, a team from JCJ’s ESOP Communications Committee attended the 49th annual ESOP Association’s convention in Washington D.C. The convention celebrated ESOPs around the country and fully packed two days with seminars on everything from ideas for team building activities to legal and regulatory updates impacting ESOPs. 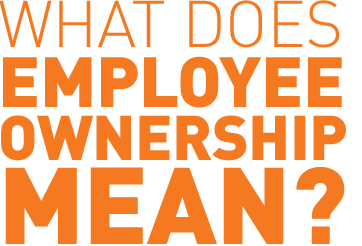 Let’s take a step back and quickly touch on what ESOP means; ESOP stands for Employee Stock Ownership Program. A company that is an ESOP is partially or entirely owned by its employees. Typically, an ESOP is still managed and run like a standard corporation. Unlike a standard corporation however, every employee-owner in an ESOP is a stockholder and has a vested interest in the fiscal health and success of the company.

The conference launched with its Annual Awards for Communications Excellence (AACE) banquet. ESOPs from around the country submitted their printed ESOP communication and education materials, five minute ESOP inspired videos, or total communication packages, for consideration for one of three AACE awards. Also encompassed within the AACE awards is an annual poster design competition, of which the winning design is distributed to ESOPs around the country for Employee Ownership Month in October - ESOPtober . The awards ceremony highlighted and celebrated the spirit of ESOP and how each of the award recipients and runners-up cultivated and contributed to successful ESOP cultures within each of their respective companies.

Award recipients represented a wide range of industries, from gardening supply, baking flour manufacturing and distribution, recycling services, and beyond. Highly representative of ESOP culture and core values, individuals present at the ceremony to accept the awards were not only ‘C’ level employee-owners from each company, but also employee-owners from across the corporate structure.

Our JCJ team was inspired and motivated by all of the AACE award entries, which were on display at the convention. Here at JCJ we have a company full of amazingly talented and creative employee-owners who are undoubtedly up to the task of creating submissions for next year’s AACE awards. To kick it off, our ESOP Communications Committee, which organizes events throughout the year, will be hosting an internal poster design competition to capture what ESOP means to all of JCJ’s employee-owners. The internal winning design will then be submitted for next year’s AACE Award poster contest.