A gentle change in pressure on the wrist announces a statement: Thin, delicate lines or bold and strong strokes express intent, hierarchy, and meaning. They communicate, connect, and regardless of culture, geographic location or tongue, the visual language is universal.

Walk through a JCJ office and you’ll run into layers of tracing paper, all kinds of drawing tools, pens, and pencils. The craft has not been forgotten. Over the month of June, JCJ encouraged their team to participate in 30 Days of Design. Some of the events encouraged the practice of sketching and hand drawing, which takes me back to the initial notion of the importance of drawing by hand. The delicate gesture cannot be properly expressed digitally if the designer has not developed strong drawing skills.

Freehand, Curvy, geometric, straight, dotted, dashed, solid, thick, medium, thin, extra thin, hairline; the list of types is endless. Even a single line, on its own, talks about something: it’s relationship to the paper; it could be dividing space on the drawing surface, or reveal its texture or transparency. It could be a basic line, or continuous with varying thicknesses. And that is just ONE line. Now think about how much information can be expressed through a collection of lines that collaborate, share, and consolidate each other’s information. There is meaning, unspoken words and emotions are represented and translated though these lines.

But there is more to lines than the representation of a project: Lines are filled with restless energy, dynamic motion, as well as express stability and rest. And then, THEN combined lines make patterns and hatches! That is a whole other door to a world of opportunities that allow us to communicate through graphic grammar.

WAVE STUDIES DRAWN WITH A CONTINUOUS MOTION IN REAL TIME. NOTICE THE CHANGE IN EXPRESSION USING PROPER TOOLS AND LINEWEIGHT. 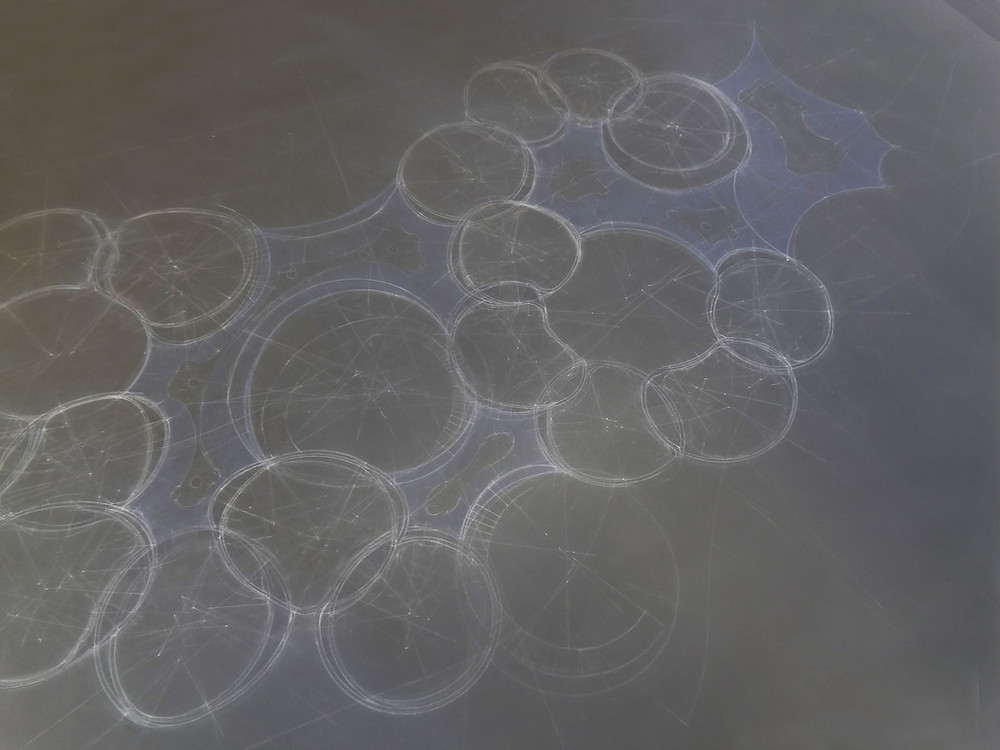 MARINE LABORATORY PROJECT: FLOOR PLAN DRAWN ON BOTH SIDES OF TRACING PAPER. ALL CURVES WERE DRAWN USING A COMPASS ON ONE SIDE AND THEIR RESPECTIVE RADII ON THE OPPOSITE SIDE OF THE PAPER TO GENERATE A HIERARCHY IN LINEWEIGHT.

Developing and mastering the art of drawing lines teaches expression. It is the most powerful tool the designer has. As Architects and Interior Designers we use these lines to create spaces and buildings. Consequently, through the built environment, we achieve to design a lifestyle for each occupant.

Color, line type, line weight; as designers we use them on a regular basis, and imagine how hard would it be to communicate if a drawing had no expression. It would be the same as having a piano where all the keys sound the same. We pick lines because of their specific character and combine them so as to compose sentences. As the visual paragraph develops, the drawing begins to speak on our behalf, until it speaks for itself. When a drawing is presented, no further explanation is needed. The viewer reads the drawing, comprehends the lines individually or as a whole.

When we learn to master the art of drawing lines, we have the ability to communicate beyond words, surpassing the boundaries of verbal language. On paper a line connects two points, and though the projects in our practice, these lines connect people.