Drawing is one of the primary visualization tools available to us as Architects and Interior Designers. Traditional techniques of quick sketching and rendering familiar to many late 20th century designers’, are being challenged by the advent of increased computer usage. Computer aided visualization programs offer the designer unprecedented opportunities for understanding three-dimensional spatial relationships, especially in the area of material and light rendition. The spectacular nature of these images is compelling and intimately connected with the perception of cutting edge design and technology.

In relation to this technological progress, the art of drawing remains relevant and critical to the success of the designers’ product. Drawing is a powerful tool that can quickly unleash the creative potential within the designer at any stage in the project. Many of us who draw frequently have an intuitive understanding that we think as we draw, and react instantaneously to what we draw. Drawing enhances our ability to think quickly and edit efficiently.

The simple connection between hand and mind can be understood by further exploring how the brain functions as we draw, reinforcing the art of drawing as a tool that designers can frequently use to enhance the potential for discovery in the creative process. Paul Klee, the Bauhaus professor and artist, spent his life exploring the pathway from unconscious to conscious creative activity. He traced our human process of seeing to the biological function of the human body: as the eye sees the object to draw, the hand and pencil touch the paper, a message is sent through the nerve endings to the brain:

“Nerves run from brain to muscle, muscle and bone are linked by tendons, bones among themselves are linked by ligaments. This action just depicted serves man’s outward form by way of partial action. It is a structural idea from within, in this case the pathway from the headquarters (the skull) to the extremities."

The ability to tap into our unconscious mind that Klee and the Surrealists intuitively understood is further elaborated upon by neural scientific research performed over several decades in the late 20th century. Francis Crick and Christof Koch created a useful summary of this research outlining the many scientists, psychologists and philosophers who have explored the relation between conscious and unconscious activity in the brain, often with differing results. Of particular interest is the intermediate-level theory of consciousness, which posits the existence of a homunculus, more commonly referred to as the “little person inside the head.”

In his book “The Quest for Consciousness,” Koch postulates that the homunculus is non-conscious and “is responsible for many complex operations, such as thoughts, concept formation, intentions…” He goes on to indicate that the non-conscious homunculus “throws new light on certain other open questions, such as that of creativity, problem solving and insight.” Koch cites examples of how scientists and mathematicians may work on a problem for hours and days and after a nights’ sleep or through some diversion an answer or “crucial insight” occurs.

As designer’s familiar with this type of creative process, we can observe numerous similar examples. As we utilize the tool of drawing, we find ourselves toiling away on a problem, a space plan, or a sketch of a room with multiple layers of tracing paper, seemingly losing our way through the myriad of options. A phone call, a meeting or appointment interrupts us. We return later and suddenly everything appears different. Or, we go home and suddenly realize that by “tweaking” some component we have the desired solution. We return to work on that solution, going back to the tool of drawing once again to help us solve the problem. 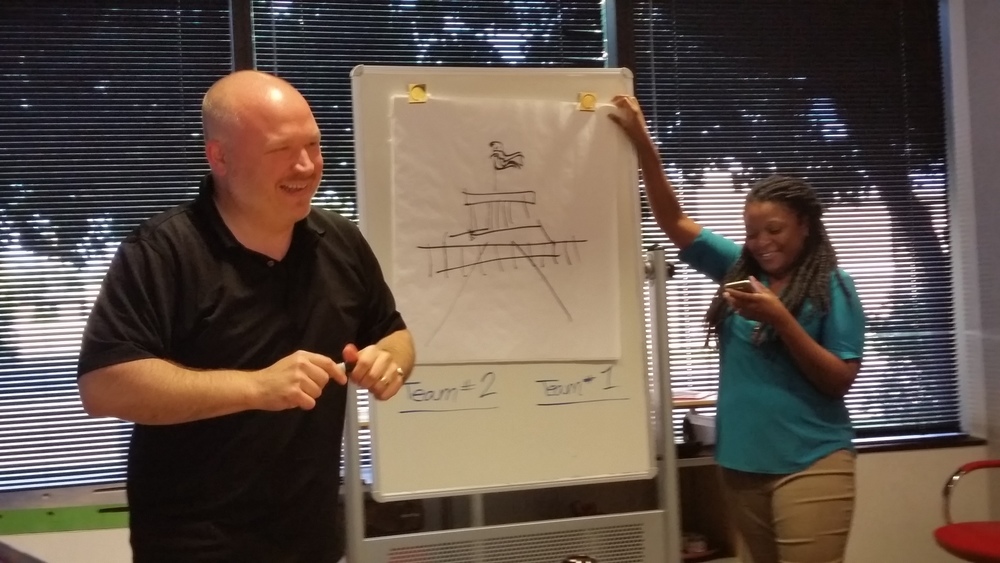 “As part of our Firm's celebration of 30 Days of Design, participating in the Pictionary game reminded us of how we all can draw. A recognizable image like the Eiffel Tower or Mt. Rushmore can easily be communicated with a few simple lines. The power of drawing conveys meaning without words. In this case drawing is more of a tool for communication as opposed to fine art. ”

One could argue that the click of a mouse can build the same bridge and give us a similar sensory connection, allowing for the same creative connection between conscious and unconscious activity. All of this is true. However, in our contemporary work environment, the primary difference between using a computer-generated tool versus a pencil depends upon when it occurs in the design process. Using computer generated three-dimensional visualization at the initial phases of the concept design requires a great deal of information, i.e. exact lengths, widths and heights, in order to be flexible enough to show multiple views of a space. Many times at the beginning of the creative process, the designer has only approximate information. Accordingly, it is highly optimal to be able to quickly sketch several views of a space, discovering the plan arrangement and its three-dimensional character through the act of drawing. A consensus can be reached about a general design direction that sets the stage for more detailed and time consuming exploration using computer generated models. The trick is as simple as the old carpenter’s adage with one modification, “use the right tool for the job- at the right time .”

A common complaint amongst many designers’, both developing and seasoned is that they don’t have time to draw or cannot draw well enough. The quick sketch is not far away from the roaming pencil on paper that we commonly associate with a doodle . Design professionals typically have some artistic training at the university level . Basic drawing courses are available at these institutions being part of core curriculum. Most trained professionals at one time or another create a still life drawing or draw the human figure. The pitfall that many design professionals find themselves in is that they want their sketches to look too presentable, pretty or perfect, similar to finished products a skilled illustrator makes or the images that computer programs provide.

One need only look at the quick sketches by great architects and designers to be reassured that drawings do not have to be perfect representations of reality; they merely need to suggest a reality of their own. Frank Gehry’s sketches offer the most extreme example. It is as if his pencil is roaming the page in search of something. In their inherent simplicity, his drawings act as a means to an end, illustrating the potential to discover solutions. The sketch is relative to the personality of the individual. Each of us has a slightly different approach. As compared to Gehry, architect Carlo Scarpa’s drawings seem formal; yet in his scribble one can view the same thinking pencil. He explores in plan, elevation, section and perspective on a single drawing, discovering the possibilities for his project. Neither of these architects is concerned with drawing perfectly. By contrast, they use a quick drawing as a tool to understand what they are embarking upon, namely the beginning of a journey we call the design process. It is here that both Frank Gehry and Carlo Scarpa seek perfection.

Dr. Koch’s inquiries into how humans think informs us on a more formal level something that many architects, designers and artists have understood a long time on an intuitive level: that when designing we are not conscious of our inner most thoughts. Koch muses that “a bilingual person can express a thought in either language, but the thought that underlies the words remains hidden. It manifests itself to consciousness only by suggestive imagery or unspoken speech, or by externalizing it. Hence the stock phrase, ‘How do I know what I think til I hear what I say.’”

We can apply this same logic to the art of drawing: “how do I really know what I am drawing until I start to draw.”